Akira Kurosawa is surely one of the most well-known Japanese filmmakers, and it was exploring some of his classic samurai films that prompted me to create this blog. 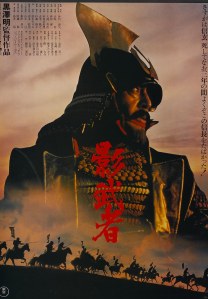 I wanted to explore more of his work and that led me to Kagemusha (1980). While I hope to watch some of his films from other genres soon, Kagemusha is nevertheless interesting even though it’s another samurai epic. It marks the first Kurosawa film I’ve seen in colour – only his third overall, following Dodeskaden and the Soviet-Japanese production Dersu Uzala. Even though colour film seemed to arrive late in Japan, Kurosawa continued working in black and white well into the 1960s. Kagemusha is also striking to me for the absence of Toshiro Mifune, Kurosawa’s longtime collaborator. The 1965 film Red Beard was their last work, but instead Kagemusha features Tastuya Nakadai as the lead – unrecognisable from his earlier appearances as villains in Kurosawa’s Yojimbo and Sanjuro.

Set in Japan’s Warring States period, the film opens with a scene that effectively explains the entire premise. Three men sit apart, all dressed and styled identically; one is Shingen Takeda, the Japanese warlord. Another is his brother and kagemusha or body double, Nobukado (Tsutomu Yamazaki). The third man is a thief who so strikingly resembles Shingen, even more than his own brother, that Nobukado proposes that he become Shingen’s kagemusha. Nobukado is enough to fool the enemy, make them think the Takeda lord is on the field of battle, but the new kagemusha is so perfect he could even fool their own troops. Any performance where an actor takes on dual roles is fascinating, and here, Nakadai is perfectly cast as both the imperious warlord and his twitchy, nervous, yet affable doppelganger. He separates the performances so well that when the kagemusha imitates Shingen, it’s tempting to think of it as Nakadai imitating Shingen’s actor’s performance – forgetting, of course, that he portrays both men.

At first the new kagemusha is reluctant but ultimately willing to go along with the deception; after all, Nobukado had saved him from death by crucifixion, so this was surely a better alternative. However, Shingen was waging a campaign to unite Japan under his rule and is wounded by a sniper while laying siege to an enemy castle. This thrusts greater and greater responsibility on the kagemusha as he must take on a more public role, convincing both the Takeda troops and their enemies that Shingen is still alive and well.

While I was originally not familiar with Kagemusha beyond the title, listening to the November 1980 episode of the excellent ’80s All Over podcast had me intrigued. However, it also gave me some slightly inaccurate expectations. Between that podcast and the typical way a movie plot unfolds, I was expecting Shingen’s double to find he was a better lord than the real Shingen. More benevolent, a better strategist – something like that. Of course, the alternative might be that he was a terrible impersonator, too arrogant or foolish to fill the role successfully, and accidentally leading the domain to ruin. In fact, the end result is more complicated, avoiding easy summarisation, and the film is probably better for it.

Ultimately, Kagemusha becomes far more bleak than I anticipated. It is, perhaps, a meditation on arrogance, envy, the class structure of Japan, and the futility of war. The thread that pulls it all apart is Katsuyori, Shingen’s true heir, but passed over in favour of Katsuyori’s son. It is Katsuyori who goads the kagemusha into having to make strategic decisions, Katsuyori who desires to take over from his father, Katsuyori who ignores his father’s strategy of sitting immovable ‘like a mountain’. His envy of the kagemusha’s power, however constrained, and his arrogance in believing he can out perform his father are his undoing, and the the last act of the film is devastating because of it.

With neither the feel-good adventure of Seven Samurai nor the expertly put together tragedy in Throne of Blood, Kagemusha feels like a difficult film to rate. At nearly three hours (the Japanese cut is, in fact, three hours, but appears to be unavailable in the UK unless Criterion release their US version here) and with a brutal ending, it is far from easy viewing, though Kurosawa puts the whole thing together with typical care and craftsmanship. It makes the prospect of Ran, his other 1980s historical epic, an intriguing proposition.

Of course, it would be remiss to discuss Kagemusha without remarking on its place in Kurosawa’s career and the unusual circumstances of its creation. The story goes that by the late ‘70s, Kurosawa was unable to get funding in Japan for his lavish productions; indeed, while he directed 23 films during his first three decades as a filmmaker, in his remaining three, he would only direct 7 more. Kagemusha languished, unfinished, as Toho refused to pay for its completion. When George Lucas, such a fan of Kurosawa that he had lifted from The Hidden Fortress’ bumbling perspective characters when creating Star Wars, discovered this, he was astonished, saying,

It was a tragedy. It was like telling Michelangelo, ‘All right, you’re seventy and we’re not letting you paint anymore.’

As Stuart Galbraith explains in his exhaustive Kurosawa biography The Emperor and the Wolf, Lucas leaned on 20th Century Fox to have them buy the international rights to Kagemusha, in the hopes of shaming Toho into funding the rest of the domestic production. Fox wanted to be able to distribute The Empire Strikes Back, and had no choice but to comply – and incredibly, Toho reacted as expecting, plunging an additional several million dollars into the production. Thus the film got made, and Lucas, along with his friend Francis Ford Coppola who had managed to introduce him to Kurosawa, got producer credits.