Original series director Kenji Misumi returns for one final film in Lone Wolf and Cub: Baby Cart in the Land of Demons (1973). 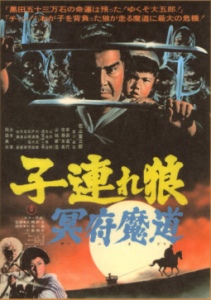 This fifth instalment again portrays an episodic series of events in which Itto Ogami (Tomisaburo Wakayama) and his infant son are hired from their life on the road to commit an assassination, all the while pursued by the villainous Yagyu clan that schemed to have Ogami cut loose as a ronin way back in Sword of Vengeance. I wrote extensively about how the first and second films, both directed by Misumi, left me cold, but that his Baby Cart to Hades finally turned things around. I was disappointed by his being replaced with Buichi Saito for the fourth film just when it seemed like Misumi was getting into his stride, but Baby Cart in the Land of Demons gives him another chance. Would this be another series high point, or a disappointment like the first couple of films?

END_OF_DOCUMENT_TOKEN_TO_BE_REPLACED

I’ve said it repeatedly already, but it’s still relevant: beyond just wanting to widen my

horizons on Japanese cinema, one of the main reasons I want to watch films from the ’50s, ’60s, and ’70s is their outsized influence on later filmmakers. Quentin Tarantino is outspoken on the influence Japanese cinema has had on his pictures, with Kill Bill in particular owing much to Lady Snowblood (1973).