Earlier on the site, I reviewed three films from Nikkatsu’s golden years in the ‘50s and ‘60s. Presented in Arrow Films’ Nikkatsu Diamond Guys Collection vol. 1, I found Voice Without a Shadow to be a decent early taste of Seijun Suzuki, but Red Pier and The Rambling Guitarist were both pretty forgettable, aside from the latter’s unusual Hakodate setting. So when I sat down to watch the films from vol. 2, I wondered whether it was worth digging into each film with a meaty review. I could just binge all three, I figured, and recreate the feeling of watching what I expected to be pretty ephemeral, throwaway pieces of entertainment in the 1960s.

The irony is that vol. 2’s films are much more entertaining and stand out from a crowded field of mid-’60s yakuza films by being much more comedic in tone. It actually feels unusual that rote action films like Youth of the Beast or Massacre Gun get their own standalone release, but Arrow has chosen to practically hide away these gems on the second volume of it’s Diamond Guys series. Perhaps it’s that the directors or the films themselves lack name recognition (Buichi Saito is perhaps best known for his work on Lone Wolf and Cub, while Ko Nakahira’s 1956 film Crazed Fruit is critically acclaimed but he’s otherwise unknown in the West, and Noguchi is billed as a ‘new discovery’).

Nevertheless, I’m going to treat these films more as a ‘collection’ than I normally would. Below are the reviews I wrote up while working through the disc, first posted over on my Letterboxd feed. Here’s hoping that Arrow digs deeper into Nikkatsu’s expansive back catalogue and releases another volume of Diamond Guys in the future.

END_OF_DOCUMENT_TOKEN_TO_BE_REPLACED

I’ve written at length about how pleased I am outfits like Arrow Films and Eureka! Masters of Cinema keep putting out releases of old, often obscure Japanese films. 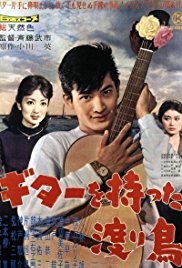 It feels like Arrow must have made a deal with whatever is currently left of the venerable Nikkatsu studio for access to a huge swath of their back catalogue in the last couple of years, because they’ve steadily released volumes in collections like Nikkatsu Diamond Guys and Seijun Suzuki: The Early Years. Not every one of these forgotten films can be a classic, but it’s often fascinating just getting a taste of what Japanese cinema was like in the ‘50s or ‘60s. Sadly, the third film in the first volume of Nikkatsu Diamond Guys, The Rambling Guitarist (1959), cannot be described as a hidden gem.

END_OF_DOCUMENT_TOKEN_TO_BE_REPLACED

Director Yasuharu Hasebe and Nikkatsu star Joe Shishido return for another yakuza collaboration in Retaliation (1968). Shot in colour, a year after their monochrome work in Massacre Gun, their follow-up has a completely different tone, energy, and style. Shishido, speaking in an interview in his seventies, ruefully commented that all these movies were the same – two gangs fight, and they just had to find a way to make it interesting and different each time. He’s not wrong, but he does himself and his collaborators a disservice: Retaliation is a far superior film to either Massacre Gun or the contemporary Tetsuya Watari vehicle Outlaw VIP, a pitch-perfect take on the late ‘60s yakuza action movie format.