The early 1970s were a golden age for gangster cinema.

In the West, there was Francis Ford Coppola’s The Godfather (1972). In the East, Kinji Fukasaku’s Battles Without Honour and Humanity (1973). And then, there was The Yakuza (1974), Sydney Pollack’s fusion of both. Developed from an idea by Leonard Schrader, an American expat living in Japan, and scripted by his brother Paul Schrader (Mishima: A Life in Four Chapters) and Robert Towne (script doctor for The Godfather), it follows several American characters who get tangled up in Japan’s criminal underworld. Robert Mitchum stars as Harry Kilmer, a former US military policeman during the Allied occupation of Japan, who returns to Japan at the behest of his friend Tanner. It seems the yakuza have kidnapped Tanner’s daughter after a shady deal gone awry and Kilmer’s connections are the only way to get her back. That means going back to Tokyo and getting in touch with a yakuza named Tanaka (Ken Takakura, The Bullet Train) indebted to Kilmer. Heavily inspired by contemporary Japanese films watched by the Schraders and no doubt hoping to cash in on the success of The Godfather via “Japan’s mafia”, The Yakuza works surprisingly well as a slow-burn crime thriller that leans heavily on its then-exotic setting.

END_OF_DOCUMENT_TOKEN_TO_BE_REPLACED

Kiyoshi Kurosawa is a fairly prolific director and, at the time of writing, I have only seen four of his many films. His work seems to be getting some new attention here in the UK with a slew of releases from Arrow Video and Eureka! Masters of Cinema. The latest entry is Cure (1997), a crime thriller with a strong undercurrent of horror. It stars Koji Yakusho (Shall We Dance?, 13 Assassins) as Detective Takabe, a haggard cop following serial copycat crimes. In each case, the killer carves an X into the victim’s throat, but no one can work out why the killers are choosing this very particular methodology when that information was never made public. Along with psychologist Sakuma (Tsuyoshi Ujiki), Takabe pursues increasingly unusual explanations for the phenomena.

END_OF_DOCUMENT_TOKEN_TO_BE_REPLACED

Two felons break out of an Alaskan maximum security prison in the middle of winter. 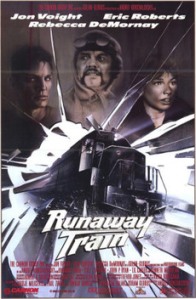 When they find come across a train leaving a depot it seems like their ticket to freedom and escape from the snow and the cold – but a freak accident traps them aboard as the unmanned train picks up speed, out of control and unable to be stopped. This is Runaway Train (1985). Starring Jon Voight (Midnight Cowboy, Heat) and Eric Roberts (The Pope of Greenwich Village, The Dark Knight) as the escapees and directed by Russian director Andrei Konchalovsky, Runaway Train is an unexpectedly brilliant thriller – but why is it on Kino 893?

Because it was based on an undeveloped screenplay than none other than Akira Kurosawa.

END_OF_DOCUMENT_TOKEN_TO_BE_REPLACED

This week’s review comes out of left-field, off the back of a recommendation by Dan Martin from the excellent new Arrow Video Podcast. 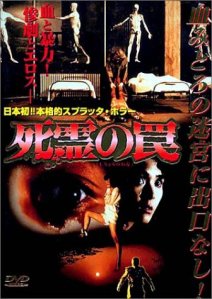 It’s Evil Dead Trap (1988), Toshiharu Ikeda’s weird, gory horror thriller. Not widely available here in the UK, it’s not a film I would have likely discovered on my own and knew nothing about, which always makes for interesting viewing.

END_OF_DOCUMENT_TOKEN_TO_BE_REPLACED

Watching foreign language films as an English speaker, you’re necessarily limited by the availability of films that have been translated and released in your local region.

That means the quality and availability of Japanese films with English language subtitles (ignoring for a moment the often very fine work of fansubbers)  is not necessarily representative of the quality or breadth of Japanese cinema in general. This is even more true when looking back at older films; while a contemporary film might at least get a limited release in the West, older films by lesser known directors or even by well-respected auteurs can be difficult to find. Even Akira Kurosawa’s outsized shadow over Japanese cinema doesn’t mean it’s possible to find all his films on DVD, let alone restored on Blu-ray. That’s why I’m so thrilled to have outfits like Arrow Video, Masters of Cinema, and the Criterion Collection that put out restored copies of both classic and obscure films. Arrow, in particular, deserves commendation for being much broader in what it will publish; it’s not that every lesser-known work is a forgotten classic, but it would be a real shame to lose these titles forever.

All that is a long preamble to introducing Arrow Video’s “Nikkatsu Diamond Guys” series. With two volumes so far, that’s six lesser known works from some cult directors that might not otherwise see the light of day again. Let’s start with Seijun Suzuki’s Voice Without a Shadow (1958).

END_OF_DOCUMENT_TOKEN_TO_BE_REPLACED

When I first started blogging about Japanese movies a couple of months ago, I began back

in the 1950s with some of Akira Kurosawa’s best known work. Then I jumped ahead to the ‘60s and ‘70s for some cult classics. Now with Sion Sono’s Cold Fish (2010) we move into the modern era. I’m a big fan of other contemporary Japanese directors but Sono had completely passed me by, and this film was recommended to me as an accessible jumping on point for the work of someone called “the most subversive filmmaker working in Japanese cinema today.”

END_OF_DOCUMENT_TOKEN_TO_BE_REPLACED

I think now that I’m thirty, all my heroes are in their 40s or 50s; old enough that I can actually still aspire, rather than compare myself, to them. Toshiro Mifune’s unhinged, trolltastic performance in Seven Samurai is great, sure, but it’s Takashi Shimura’s older, stoic-yet-jolly Kambei who’s my favourite character. He’s the Six Degrees of Kevin Bacon connection to The Bullet Train (1975), where he has a minor role as the head of Japan National Railway.