This week’s review comes via the Masters of Cinema restoration of Bakumatsu taiyô-den (1957), 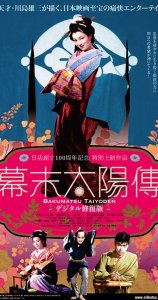 alternately translated as A Sun-Tribe Myth from the Bakumatsu Era or Sun in the Last Days of the Shogunate. A slice-of-life comedy set in a Shinagawa brothel in the waning days of the Shogunate, just before the Meiji Restoration and the complete upheaval of Japan’s feudal society, the film follows Saheiji (Frankie Sakai, best known to western audiences for his turn in the 1980s Shogun series) as an incorrigible drifter who spins his unpayable debt to the Sagami Inn into a series of odd jobs and cons.

END_OF_DOCUMENT_TOKEN_TO_BE_REPLACED

The second movie in the BFI’s Kurosawa box set, Throne of Blood (1957) was a total mystery to me. I hadn’t seen Seven Samurai, but I at least knew the rough plot outline. All I knew about Throne of Blood was what I could figure out from the cover, which was that some liberties had been taken with the original Japanese, ‘Spiderweb Castle’. Or as the subtitles put it more fustily, ‘Cobweb Castle’. About ten minutes in though, it became clear this was Kurosawa doing Macbeth, and knocking it out of the park.