It’s back to Kurosawa for Yojimbo (1961). I was a little apprehensive after The Hidden Fortress, but any worries were misplaced: this is a samurai gangster action comedy masterpiece.

What I’ve really enjoyed about the BFI’s Kurosawa collection is that despite each film ostensibly being a samurai movie, they’ve each been completely different (admittedly, Sanjuro, the final movie in the collection, is a sequel to Yojimbo, so maybe that won’t hold). The style, the tone, the performance drawn out of Mifune – everything changes. This time Mifune is in good humour throughout, pitting rival yakuza gangs against each other in 1860s Japan.

The mix of crime, action, and comedy had me thinking of Tarantino and Guy Ritchie (on his better days). The eccentric cast of thugs is particularly Tarantino, from the gunslinger to the unibrowed brother to the giant played by a 6’8” pro-wrestler, Tsunagoro Rashomon. On the other hand, I kept thinking I’d seen this plot play out before in a Western somewhere, so I was fairly pleased with myself when I found out Sergio Leone had remade it as A Fistful of Dollars (without permission; Kurosawa sued him). 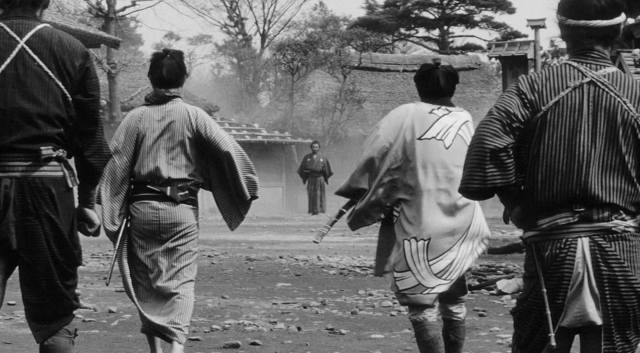 Akira Kurosawa directed 30 films over his long career, but again, it’s stunning how varied they are. It’s almost hard to imagine that this is the same combination of Kurosawa and Mifune that led to the stage-like Throne of Blood or even Seven Samurai, another film whose plot slots easily into the Western mold. I particularly enjoyed learning that the soundtrack – unlike anything I’ve ever heard and definitely not what I expected – was the result of Kurosawa asking his composer to simply do something different to the other period films popular at the time.

If I had any criticism to make at all, it’s that Toshiro Mifune should never have shaved off his beard.