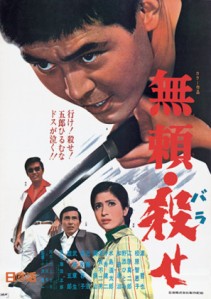 END_OF_DOCUMENT_TOKEN_TO_BE_REPLACED

Each time I fire up another movie from the Outlaw series, I’m struck by the question of 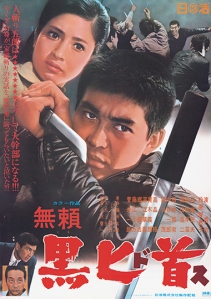 how I’m going to find something meaningful to comment on in a review that I haven’t already said about one of the previous films. Then Outlaw: Black Dagger (1968) did something unexpected: it commented on its recycling of the same actors over and over again.

END_OF_DOCUMENT_TOKEN_TO_BE_REPLACED

I’ve been reviewing Nikkatsu’s late-60s Outlaw VIP series here on Kino 893, and like every other film I look at, I like to include the director. Unfortunately, I’ve just realised that I’ve been crediting the wrong man for every instalment after the first! Toshio Masuda directed Outlaw Gangster VIP, but the first sequel was actually the directorial debut of Keiichi Ozawa. The third film, Heartless, was from Mio Ezaki, and then Ozawa returned for the last three. I must confess, I only realised my mistake while reading the booklet included in the Arrow Video release.

It’s surprisingly difficult to dig up information on some of these films, so all credit to Arrow and the supplementary material with their releases. I’ll have to keep a closer eye on the credits!

I’m aiming to post a new review every Friday, and coming up, I’ve got the last Outlaw VIP movies, Sion Sono’s Cold Fish, and the first Stray Cat Rock movie, Delinquent Girl Boss. If anyone has suggestions not already mentioned on the Archive page, let me know in the comments!

Four films in and the Outlaw VIP series is beginning to creak. As I noted in reviews of

previous instalments, Nikkatsu put out no less than six Outlaw movies starring Tetsuya Watari in 1968 and 1969. The fourth, Outlaw: Goro the Assassin (1968), sees the titular anti-hero Goro Fujikawa as a drifter without a yakuza family who gets involved in yet another feud involving local criminals and innocent civilians.

END_OF_DOCUMENT_TOKEN_TO_BE_REPLACED

a series of amazing revelations. First, that really is the title (at least the one Arrow Video decided to go with). Second, it came out in April 1968, just a few months after the first movie. Third, no less than five movies in this series came out in 1968 – it’s almost a shame the sixth skids into 1969, but that’s a movie for another day. Fourth, these movies are almost impossible to research: there aren’t even Wikipedia articles, in English or Japanese.