Yesterday Netflix released Duncan Jones’ Mute (2018), the cyberpunk movie the director had been gestating for some sixteen years. Loosely connected to his debut Moon (2009) and starring Alexander Skarsgård, Paul Rudd, and Justin Theroux in a near-future Berlin, I found it unevenly paced but totally engrossing – well worth a try from any subscriber, even if the director himself has said it’s a Marmite kind of film. Blade Runner may have set the template for cyberpunk visuals but Mute managed to remind me of the even filthier, cheaper, more run-down and lived in worlds of Harebrained Schemes‘ Shadowrun games – especially, of course, the Berlin-set Shadowrun: Dragonfall.

Halfway through the movie, as Paul Rudd’s uncharacteristically unpleasant Cactus Bill skulks through graffiti covered streets, what should walk prominently across the shot but a Basset Hound?

Of course, I can’t help but assume this is a reference to my favourite cyberpunk series, Ghost in the Shell: 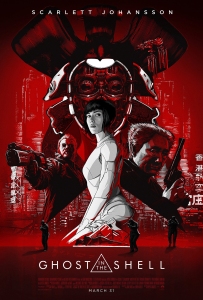 – the US remake from director Rupert Sanders (Snow White and the Huntsman) and starring Scarlett Johansson (Lost in Translation, Under the Skin) as the Major. Remakes in general are always a tough sell, and while I think there are some good examples on both sides of the equation (The Ring is a strong adaptation of Ring, Yurusurezarumono is a fantastic adaptation of Unforgiven) the general expectation is that any piece of world cinema being adapted for Hollywood is going to lose something in translation. I wanted to approach it with some degree of open-mindedness – perhaps it could be one of those rare examples of a remake that transcends its source material, or if nothing else, perhaps it could stand alone as a decent film even if in failing to surpass the original version it winds up feeling unnecessary (not unlike the recent RoboCop remake).

END_OF_DOCUMENT_TOKEN_TO_BE_REPLACED

is a post-cyberpunk, post-human foray into the vanishing line between humans and machines. Set some time after the conclusion of the first film, the sequel follows Batou and Togusa, newly partnered up, as they investigate a series of grisly murders involving gynoid sex dolls. Despite being overshadowed by its predecessor, Innocence remains one of my favourite anime film.

END_OF_DOCUMENT_TOKEN_TO_BE_REPLACED 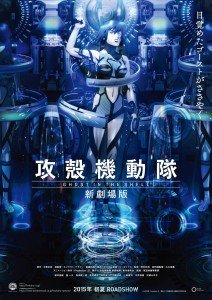 (after the original films and the Stand Alone Complex era of the early 2000s). In Japanese, it’s called ‘Shin Gekijōban’, which is akin to ‘the new movie based on an anime or television series’. This explains both the clumsy English language title and the reliance on characters and plot elements from ARISE that, enjoyable or not, prevents it from excelling as a standalone experience.

END_OF_DOCUMENT_TOKEN_TO_BE_REPLACED

I first saw Ghost in the Shell (1995) in the late ‘90s, on a probably-rented VHS, with the American dub (which, to my recollection, actually held up as

one of the better dubs I’ve heard, though I haven’t tested that in years). Since then I’ve revisited it several times, with the original Japanese audio, both before and after I learned to speak the language. I recently had the opportunity to see it in a cinema for the first time, which presents a perfect moment to discuss the film here.