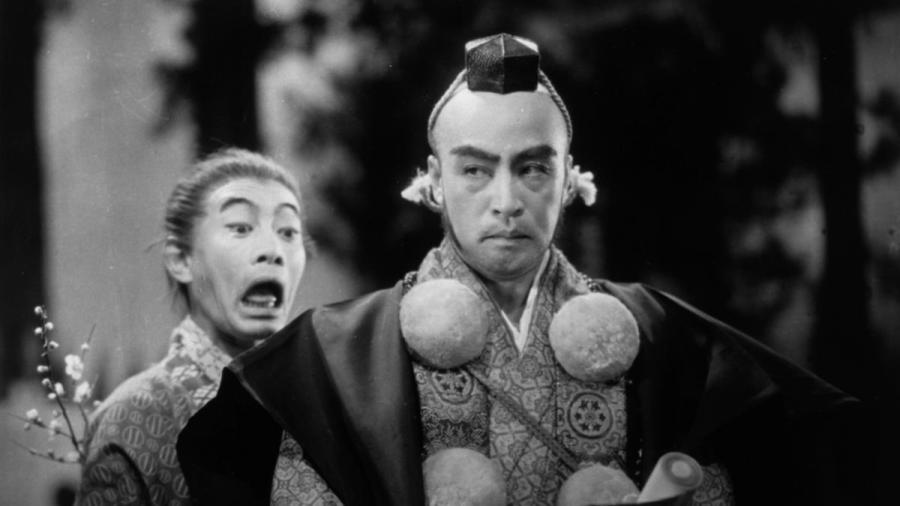 After writing about the BFI’s celebration of Japanese cinema earlier this month, it still took a little while before I renewed my subscription to the BFI Player and started indulging in some classic films. Over the weekend, I rewatched Akira Kurosawa’s Stray Dog, which absolutely holds up as a portrait of Tokyo in its sweltering summer heat, and that left me hungry for more of the director’s work. In truth, I didn’t actually expect much from The Men Who Tread on the Tiger’s Tail; I had a suspicion that the story around its banning in 1945 by occupying forces would be more interesting than the film itself. Fortunately, I was wrong.

Coming in just under 60 minutes, this is Kurosawa’s adaptation of a particularly famous kabuki play, Kanjinchō, itself adapted from an earlier, even older Noh play, Ataka. A fairly thorough series of opening text sets the scene: the year is 1185, and the shogun’s brother, Yoshitsune Minamoto, has just delivered a decisive naval victory. However, the shogun, growing paranoid, fears his brother will lead some kind of coup, and orders him killed. The film follows Yoshitsune and six of his retainers, disguised as itinerant monks – yamabushi – as they attempt to pass through a checkpoint set up by the shogunate’s men and escape.

The bulk of the film is set at the checkpoint, where Yoshitsune’s most faithful retainer, the near-mythological warrior-monk Benkei (Denjirō Ōkōchi), must convince the local noble to let them pass through unharmed. It’s a scene that gradually ratchets up the tension, one that reminded me of other high pressure scenes, in films as varied as Harakiri to Inglourious Basterds; specifically, the latter’s wonderfully tense conversations between undercover agents and occupying forces. Yet the film is also very, very funny; the tension is cut through by the presence of the group’s eighth member, a porter played by pre-war Japanese comedian Kenichi Enomoto, better known by his stage name, Enoken. His rubber-faced performance is the perfect contrast to the life-or-death ruse.

Through his career, Kurosawa would adapt several other plays – perhaps most notably Macbeth in Throne of Blood and King Lear in Ran – and it’s always fascinating to see how he stages his work. In The Men Who Tread on the Tiger’s Tail, he is more overtly theatrical than usual, with frequent cutaways to a view of the action that reflects the audiences’ view of a kabuki play in progress.

Quite apart from the plot and delivery of the film itself, it’s also interesting to see Benkei depicted – a historical figure blown up to mythological proportions, his strength and stature make him an archetypal figure in Japanese culture and fiction, yet he rarely appears on film despite a strong presence in plays and theatre. Other than a taiga drama – a type of drama broadcast year-long by NHK, Japan’s public television service – this is probably the most prominent appearance of Benkei that I’ve yet discovered in film or television.

Short, tense, and funny, there’s little reason to avoid this Kurosawa piece. It’s a fascinating, albeit small, piece of the great director’s career that stands on its own merits.

The Men Who Tread the Tiger’s Tail / 虎の尾を踏む男達