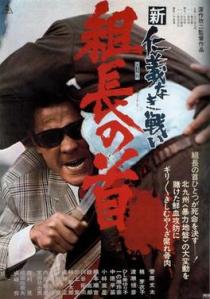 At this point in the the mid-1970s Toei wanted nothing more than work that echoed Fukasaku’s previous successes in the gritty, relatively realistic jitsuroku era of yakuza movies. The Boss’s Head fits the established pattern of belligerent gangsters proclaiming fealty to their boss and their brothers in one moment and stabbing them in the back the next. Even without Kuroda’s interruption, it seems clear that the Owada family is doomed to internecine squabbles, as their boss vacillates over who to crown as his successor and his underlings all vye for control of rackets and territory. Sugawara’s Kuroda and Yamazaki’s Kusonoki are wildcards that just accelerate the process.

What always sets Fukasaku’s films apart is his eye – or that of his cinematographer – for the little details. His scenes are often hectic and overstuffed. Take the first time Kuroda visits the Owada offices. The room they pass through on the way to meet the boss is completely overcrowded with gangsters piled around low tables, a constant clamour of movement and noise and cigarette smoke. Every location looks lived in and worn down. There’s also no small amount of ‘70s car porn. No particular models stood out (unlike, say, the fastback Celica in The Bullet Train) but for a fan of vintage Japanese cars and fender-mounted mirrors, there’s a lot to love. There are even a couple of car chases that distinguish this film from its Battles Without Honour and Humanity predecessors, though they’re not entirely successful. After the initial excitement of seeing Fukasaku’s trademark chaotic action scenes translated into a car chase, it all descends into a muddy farce with just a couple of old cars running rings around each other in a field, with the whole debacle going on far too long.

It’s also interesting how much the film lingers on drugs and addiction, on top of other seedier elements that were perhaps glossed over in the earlier Battles pentology. Like New Battles Without Honour and Humanity, The Boss’s Head seems determined to be even more gritty and unpleasant than the earlier films. Kusonoki’s addiction and downward spiral, an interrupted prison rape – these seem like things that could have been part of the original series’ world, but didn’t appear on film. Here, Fukasaku seems to want to outdo himself. Likewise, Sugawara’s Kuroda is far less sympathetic than Battles’ Hirono; it’s absolutely clear that he’s only in it for himself. When he’s betrayed by Kusonoki and it looks like the Owada might not pay him his due, he goes to incredible lengths to get what he feels is owed – at one point even using the injuries his underlings sustained as a cover to get closer to one of his targets. It feels like Fukasaku truly wanted to underscore how bad the yakuza could be, with no room for any romanticisation of a life of crime.

Ultimately, it feels a little churlish to repeat what I wrote regarding New Battles Without Honour and Humanity – The Boss’s Head just doesn’t bring anything substantively new to the table. It’s still a well-executed yakuza movie, and I’m sure will satiate any die-hard fans of the genre, but considering the prolific director released it in the same year as his own far superior and thematically more complex Cops vs. Thugs, it’s difficult not to judge the film a little more harshly than I otherwise would.

New Battles Without Honour and Humanity: The Boss’s Head