Continuing a dive into Nikkatsu’s vault we have Toshio Masuda’s Red Pier (1958). 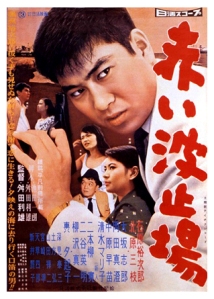 It stars Yujiro Ishihara as “Lefty” Jiro, a ‘50s gangster laying low in Kobe after killing a civilian over a drug smuggling racket. When he falls for the victim’s sister and starts to let slip his involvement, his low-key criminal underworld starts to come unravelled.

Like Voice Without a Shadow, its neighbour on the first volume of Arrow’s Nikkatsu Diamond Guys collection, Red Pier is a fairly straightforward, black-and-white action movie from Nikkatsu’s early days – long before later yakuza series like Outlaw VIP, and even longer before the money started to run out and the company switched to the more lucrative ‘roman porno’ market. There’s something refreshingly unpretentious about films from this era. On top of that, it’s fascinating seeing the post-war fashions and architecture of the mid-to-late ‘50s. One moment Jiro and his crew are hanging around docks and side streets that looks decidedly antique – the next, they’re in front of a Kobe train station, and if not for the cars driving by the scene could be set in the modern day.

There’s even an astonishing mid-film musical number, seemingly sung by Ishihara himself, perhaps even intended to be diegetic and actually an outburst by the character Jiro. During the song, the various shots of the city and port reminded me of the long musical interludes in the Ghost in the Shell films. Other scenes in the boiling hot police station seem designed to riff on Stray Dog, but the difference between that film’s ruined post-war Tokyo and Red Pier’s booming Kobe is striking.

There are scattered moments where the film seems a little ahead of its time (and not just because of Jiro’s incredible, anachronistic-looking wraparound sunglasses). When the detective tells Jiro the assassin coming after him is in league with one of his yakuza comrades, Jiro has none of it. He tells the cop that he doesn’t understand their world, and not to badmouth his ‘brother’. But the cop tells him how naive he is to miss how corrupt they are. Even though the film never really identifies the organised criminals as yakuza, or plays around with tropes like families and syndicates, oyabun and wakagashira, it feels surprisingly modern in portraying the yakuza in a negative, unheroic light – though like Outlaw VIP later, Jiro is perhaps the lone ‘good’ yakuza in a sea of thugs. I’d always read that before the ‘jitsuroku’ era of more realistic yakuza movies the trend was towards ‘ninkyo eiga’, chivalry movies, where the gangsters were one of the last bastions of old, honourable Japan – modern samurai, even. Although the protagonists of Red Pier and Outlaw VIP fit that mold to some extent, I’ve yet to see a film that casts the yakuza in an unambiguously positive light. Perhaps they don’t really exist, and at the very most, the lone, honourable hero will be fighting against his corrupt brothers or rival gangsters.

Despite some good scene-setting, a cracking soundtrack, and little quirks like Jiro’s habit of using firecrackers as a distraction, Red Pier is not the most attention-grabbing film. The plot kind of goes to pieces in the middle before lots of exposition rights the ship towards the end. It’s still a fun taste of late ‘50s Nikkatsu cinema, but after the surprisingly well put together Voice Without a Shadow, sadly a little disappointing. Masuda’s later work on the extremely similar Outlaw VIP series is much more engaging.