From Kiyoshi Kurosawa, director of Sweet Home and with a long career dipping in and out of the horror genre, comes Creepy (2016). Ex-cop Takakura (Hidetoshi Nishijima) 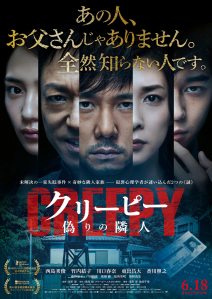 leaves his job hunting serial killers to become an academic specialising in criminal psychology, but when his new job is unfulfilling he re-opens the cold case of a missing family on the side. In a parallel story, his wife becomes perturbed by their unusual new neighbour Nishimoto (Teruyuki Kagawa). But as Takakura tells his wife – serial killers are usually nice to their neighbours, so she has nothing to fear from the socially graceless Nishimoto. Right?

In Creepy, Kurosawa (no relation to the more famous director) puts together an atmospheric, if not entirely original, take on the serial killer genre adapted from a mystery novel of the same name by Yutaka Maekawa. Takakura is a cop fascinated by serial killers to the point he gets excited at uncovering their crimes, gracelessly asking too many questions of surviving victims. It’s all very Hannibal. When one suspect leaves him with a knife wound in the back, more shades of Red Dragon, he retires to teach criminology. Bored after class, he asks a colleague what professors do in their off time. Research. That leads him to investigating the case of a missing family from six years earlier. No bodies were found, but it was nevertheless treated as an unsolved crime, and that’s enough to pique his interest.

Meanwhile, Takakura has just moved into a new neighbourhood with his wide Yasuko and enormous floofy dog Max. They try to introduce themselves to their neighbours – in a perfect subversion of the traditional Japanese rituals for such an occasion – but are rebuffed. One neighbour bluntly points out that getting to know people generates social obligations that are just too much trouble, and the other is Nishimoto, an odd little man who vacillates between being incredibly socially awkward and smoothly charming.

Inevitably, Takakura’s cold case and his suspicions about his neighbour begin to collide, and this is where the film takes a few hits. More than once, I felt like scenes were missing, with quite a bit of plot progression implied rather than shown. When everything actually unfolds, I found myself with lingering questions about the mechanics of what I was seeing. Nevertheless, when the film does delve into soundproof rooms, mysterious drugs, and vacuum-packed evidence it’s all shot intelligently and menacingly, even if I was left occasionally scratching my head.

While flawed, Creepy is atmospheric thriller with good acting and strong visuals. For fans of the serial killer-horror genre it’s worth checking out, and even without a particular interest in this oft-imitated kind of film, the performance Kagawa puts in as the perplexing Nishimoto is excellent.