The early 1970s were a golden age for gangster cinema. 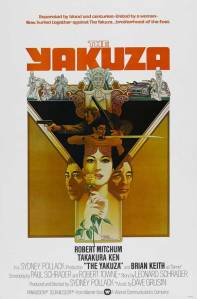 In the West, there was Francis Ford Coppola’s The Godfather (1972). In the East, Kinji Fukasaku’s Battles Without Honour and Humanity (1973). And then, there was The Yakuza (1974), Sydney Pollack’s fusion of both. Developed from an idea by Leonard Schrader, an American expat living in Japan, and scripted by his brother Paul Schrader (Mishima: A Life in Four Chapters) and Robert Towne (script doctor for The Godfather), it follows several American characters who get tangled up in Japan’s criminal underworld. Robert Mitchum stars as Harry Kilmer, a former US military policeman during the Allied occupation of Japan, who returns to Japan at the behest of his friend Tanner. It seems the yakuza have kidnapped Tanner’s daughter after a shady deal gone awry and Kilmer’s connections are the only way to get her back. That means going back to Tokyo and getting in touch with a yakuza named Tanaka (Ken Takakura, The Bullet Train) indebted to Kilmer. Heavily inspired by contemporary Japanese films watched by the Schraders and no doubt hoping to cash in on the success of The Godfather via “Japan’s mafia”, The Yakuza works surprisingly well as a slow-burn crime thriller that leans heavily on its then-exotic setting.