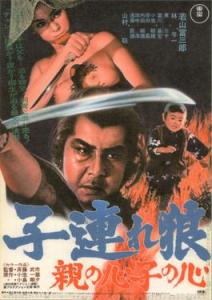 Returning to the Lone Wolf and Cub series evokes similar feeling to Outlaw Gangster VIP. Like that yakuza series of the late ‘60s, Lone Wolf and Cub appeared in theatres every few months with a new film not unlike a new episode of a television show. And much like television before the rise of heavily serialised shows that relied on a slowly advancing, overall arc story that required viewers tune in every week or miss out, Lone Wolf and Cub offers pretty much the same content each time. Baby Cart in Peril (1972), the fourth film in the series, is no different. Even allowing that I left the series alone for several months before picking it up again – much as contemporary moviegoers would have seen it back in ‘72 – I found myself looking at a very familiar movie. Ogami (Tomisaburo Wakayama) is hired as an assassin, there’s a beautiful but deadly woman, the assassination subplot weaves around the ongoing Ogami-Yagyu clash, and there’s a gigantic fight at the end in another of Japan’s mysteriously sandy valley locations where they seem to film all the Super Sentai show battles.

In my review of Baby Cart to Hades, I noted that just when departing director Kenji Misumi finally seemed to have a handle on the structure and turned out a fun if not exactly riveting picture, he stepped back to be replaced by Buichi Saito. While Peril is overall very similar to what came before, Saito does have a few new tricks. Like the other instalments, Peril relies on a number of flashbacks, but I found them much easier to follow this time around given some basic but necessary use of special effects and variation in visual style, where the earlier films would sometimes cut to a different era and leave me reeling and wondering when something was meant to occur, like a ropey Tarantino movie.

Ultimately, Baby Cart in Peril puts me in an odd place. The quality is undoubtedly higher than the first two movies in the six-film series, and might even be better on a purely technical level than Baby Cart to Hades. At this point, however, much like with the Outlaw Gangster VIP series it’s impossible not to feel that you’re watching an extreme retread. As such, it winds up feeling stale. At this point I think I’ve established that no matter how cult Lone Wolf and Cub may be, it just isn’t my cup of tea, but I’m determined to see it through to the end with Baby Cart in the Land of Demons and the final White Heaven in Hell.