By the time I got around to seeing Your Name. (2016), it was already a phenomenon. 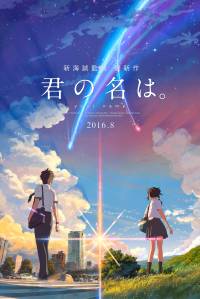 It held the top spot at the Japanese box office – before returning for another three. It was the second largest box office for a domestic Japanese film behind Spirited Away, and the first non-Miyazaki anime to pass $100 million dollars. Critical praise was high, and the fandom was intense. People were going on pilgrimages to locations featured in the film. As time slipped by and I still hadn’t seen it, I grew worried that it couldn’t possibly live up to expectations – or worse, that all that hype would undermine even an above average film. In the end, I needn’t have worried: Your Name is visually stunning and has a story to match.

Somehow, despite all the build up, I had managed to avoid knowing almost anything about the film, and in case anyone reading this is in the same position, I’m going to reveal as little as possible about the plot. Going in nearly blind to the content probably helped against those hyperbolic expectations. On the other hand, it’s hard to review a film without revealing anything. Your Name. follows two characters, high schoolers Taki and Mitsuha, connected by their dreams. Taki lives in Tokyo, Mitsuha in a fictional-but-realistic rural Japanese mountain town in Gifu. He works part-time as a waiter in a fancy restaurant, she’s training to be a shrine maiden. They’ve never met, but their mysterious connection ties them together. From this very basic premise, the film layers in romance, slice of life comedy, and magical realism, building to a tense conclusion I had no way of expecting – if ever an anime deserved the ‘that escalated quickly’ meme, it was this.

Leaving the plot aside for a moment, this film is gorgeous. It is improbably well-animated. The reason fans can make pilgrimages to some of those featured locations in Tokyo is that the animation often has an almost photo-realistic quality. Further beggaring belief, director (and writer) Makoto Shinkai complains that the production didn’t have enough time to reach the standards he wanted [warning: link contains some plot spoilers]. Not everything is just about realism though – one of the most stunning visuals that repeats through the film is the aurora following the trail of a comet soaring through the night sky. There are also clever uses of shots and recurring images, with my favourite being a visual motif that ties together train doors sliding open in bustling Tokyo with paper shōji doors sliding open in traditional Itomori. It’s the same kind of juxtaposition of modern and traditional (backed up by incredible animation) that so endeared me to Summer Wars. It’s also kind of fascinating to see something that so contrasts Tokyo and rural Japan become such a hit, especially in the way it weaves Shinto into the storyline; maybe that’s part of what made it resonate so well with Japanese audiences.

Structurally, I was surprised to find that the film almost works like an episodic anime, with an actual intro sequence that plays after the cold open, with other musical interludes as the story progresses feeling like the start of a new episode.

If I have any criticisms, they’re fairly limited. First, the magical realism – or science fiction – element that drives the story initially is great, but Taki and Mitsuha seem to take it in their stride without ever really questioning why or how it’s happening. Similarly, their friends and families seem almost oblivious to what’s going on; they comment on it, but no one really seems as alarmed as they might be. Secondly, while Mitsuha is still very important to the overall story arc, she gets short-changed in terms of actual screentime, with Taki having both a far larger presence in the film and far more legwork in terms of reaching towards the conclusion.

Overall, though, Your Name. is a brilliant new inductee into the canon of all-time great anime. The story is endearing and the visuals are practically peerless.