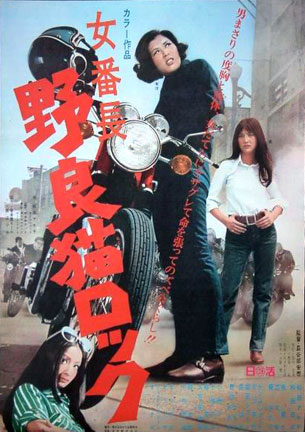 Delinquent Girl Boss has a similar format to some of the late ‘60s yakuza movies Nikkatsu was putting out and that I’ve been working through. Wada’s Ako rides into town, gets entangled with a local gang’s troubles, and sticks around for the bloody finale. This time around the gang is an all-female group of juvenile delinquents led by Meiko Kaji’s Mei and Yuka Kumari’s Mari (who, thanks in part to her giant sunglasses, often struck me for her similarity to Branded to Kill’s Annu Mari). From what I’d heard of the movie before watching it, I was expecting all the girls to be bikers, but it’s actually only Ako on her UJM Honda – although the rival gang do have a whole bunch of bikes and one hilariously terrible Daihatsu Fellow Buggy, but more on that later.

I had expected Wada to be underwhelming, but I ended up having the opposite reaction. In Delinquent Girl Boss, she’s fantastic. At this point she was already a well-known singer, and she does take to the stage to sing at the club the film flits in and out of, but it doesn’t seem like she ever acted much before or after this. It’s worth comparing her to Meiko Kaji who would go on to become far more famous playing similar hard-boiled women like Lady Snowblood and Female Prisoner Scorpio. Kaji, though, looks like a conventional leading lady – it’s only the roles that are a little subversive. Wada on the other hand is taller than just about everyone in the cast – something the script comments on when a thug is asking after “that tall girl” – and the way she carries herself is masculine or butch. The film plays around with this, with one of the delinquents exclaiming “you’re a girl!” when Wada takes off her helmet and let’s her hair down, after which they drag her off to dance. In her motorcycle denim, helmet, and mirrored shades she’s easy to mistake for a man, and it’s therefore easy to assume this was the reason she didn’t resonate with audiences at the time in a way that Kaji did. It’s hard to know exactly what happened and why she didn’t return. She’s mentioned briefly in Chris D.’s “Outlaw Masters of Japanese Film”, but it doesn’t shed any light on whether it was the studio who removed her or if she simply wasn’t interested in coming back. Either way, it’s a real shame she isn’t in more films.

On a technical front, the film hasn’t aged incredibly gracefully, with the transfer (presumably used in the Arrow Video release, but I watched it on Amazon Video) marked by some muddy and difficult to parse darkness, lots of scratches, and the occasional distracting flash of light. I’m guessing that carefully preserving a ‘70s exploitation movie was not a high priority for anyone at Nikkatsu. In daylight scenes though it’s much better, and there are actually some great effects that, given when it was filmed, genuinely made me wonder how they pulled it off – shots of Wada (or her stunt doubles) racing around on her motorcycle throughout the film, or during the chase that takes up a significant portion of the second half. Mounting a camera to a motorbike in that era can’t have been an easy proposition, forty years before the GoPro.

That chase is actually quite good. I did read one review – which while not particularly positive, did sell me on the whole enterprise – that said:

“at a certain point, it seems as though director Yasuharu Hasebe simply drove around the city and said “put a motorcycle there,”” – Scott Nye, Criterion Cast

It’s here that Wada’s bike, most likely a Honda CB750, gets put up against one of the most hilarious, least imposing vehicles ever to be driven by a bad guy on film: the Daihatsu Fellow Buggy. It’s a kei car, which means it’s tiny, and quite possibly had a smaller engine than the motorbike it was meant to be pursuing. The chase proceeds through city streets, up staircases, down through subway entrances and indoor malls. As Nye wrote, though, the whole thing does lack a certain urgency, perhaps because they didn’t have the budget to either fake any of it or take extreme risks. On the other hand, it’s quite satisfying seeing that motorcycle climbing up and down stairs and otherwise careening around, knowing they probably actually had to do that in order to get it on film.

Like the Lady Snowblood movies, there’s a subversive streak to the film. Made in 1970, it’s hot on the heels of Japan’s restless ‘60s, marked by leftist, sometimes violent student protests. The villains in this film are the Seiyuu-kai. They’re not yakuza, and while it’s never quite made explicit, it’s strongly implied they’re a right-wing fascist or nationalist group, trying to make money on gambling scams in order to fund their operations. It invites comparison to Yukio Mishima’s Tatenokai, a private militia that in late 1970 led a brief, failed coup attempt to restore Imperial Japan. It’s their attempt to have Kelly, a mixed race boxer, throw a fight that acts as the inciting incident for the rest of the film.

Overall, Delinquent Girl Boss is a mixed experience, but I ended up enjoying it a lot more than I thought I would. Between Akiko Wada’s screen presence and the joy of seeing 1970s motorcycles tearing up Tokyo, it’s well worth checking out.