After being so pleasantly surprised with The Tale of Zatoichi and in particular Shintaro Katsu’s endearing performance as the titular blind masseuse and master swordsman, I 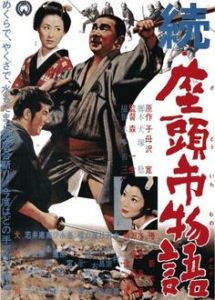 was keen to continue my “Zatoichi-gatsu” and watch the next entry in the series. I was also a little nervous: the series stretched to twenty-five films between 1962 and 1973, not counting later entries and remakes. Surely the quality would not be maintained for the duration, so it was just a question of when the drop would come. It was also not obvious whether a sequel would be an original story or merely a rehash of the first film; in watching many ongoing series from Japan’s 1960s and ‘70s like Outlaw Gangster: VIP or Lone Wolf and Cub, it’s clear that each film in the series follows a fairly rote formula, often with the same cast returning in “new” roles. Would The Tale of Zatoichi Continues (1963) buck that trend, or mark the start of a more formulaic martial arts film?